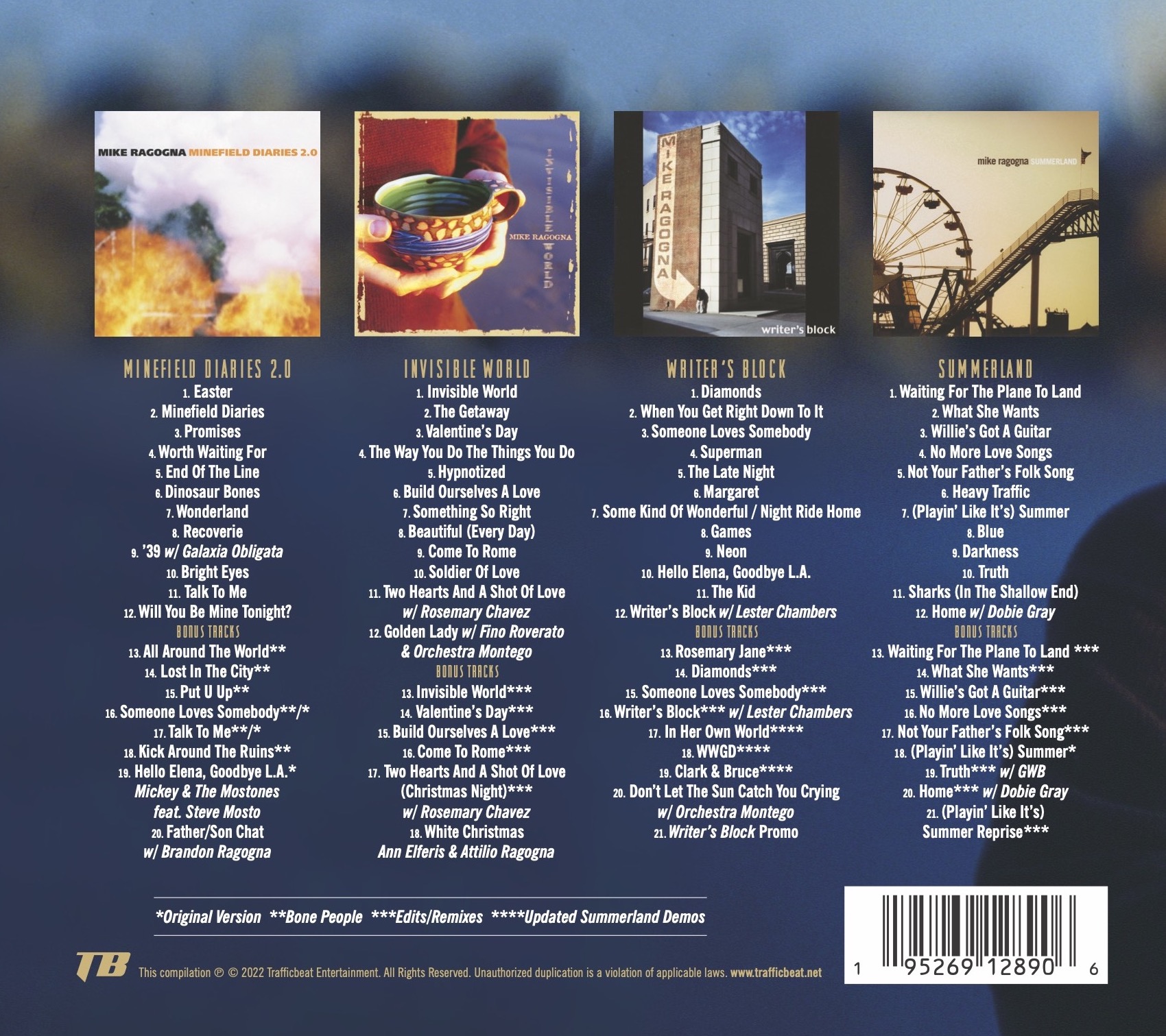 Mike Ragogna‘s California Chronicles includes a restoration of the album Invisible World as its second disc and was recorded before disc three’s Writer’s Block, although only a variation of the project was later released. It was pressed up two years after Writer’s Block as the truncated Valentine’s Day (named after a Ragogna original) due to what the artist calls “overthinking.” “Invisible World was recorded as a jazzy R&B project and was such a departure from my pop-rock, singer-songwriter approach that I held it back until I understood what I had just done,” says Ragogna. “Looking back, that was a mistake but I’m glad the album is now mostly presented on California Chronicles as I originally intended.”

Roverato’s work is so strong on Invisible World that he is credited as a featured artist on Ragogna’s cover of Stevie Wonder‘s “Golden Lady” because of its sensuous interaction with the additionally featured Orchestra Montego. “While co-producing an Edie Brickell collection with her, since I covered her husband Paul Simon‘s ‘Something So Right’ on Invisible World, I sent the couple a mastered CD ref of the project,” says Ragogna. “In a phone call about a week later, Paul asked, ‘Hey, is that you on guitar?’ I replied, ‘I really want to lie to you, would that be okay?’ We both laughed, then I told him it was the amazing Fino Roverato and gave him contact information.”

The restored version of Invisible World also includes “Two Hearts and a Shot of Love” that features vocalist Rosemary Chavez, who Ragogna worked with in the ’80s on the Roar soundtrack that was produced by Terence P. Minogue. “Terry was my producer at the time and he brought me on board for the soundtrack album to Roar, a movie that starred Tippi Hedren and her daughter Melanie Griffith,” says Ragogna. “Rosemary had this truly amazing voice and we had a reunion with Terry in the time period that I was recording Invisible World. So I invited her to duet with me on the track and kept her vocals on a Christmas remix version since I just couldn’t picture the track without her awesomeness.”

Another reunion that occurred on Invisible World was with Ragogna’s former producer Minogue. “Terry gifted me these amazing string arrangements with a trio that included first call and Michael Jackson‘s Thriller viola player, Novi Novog, formerly of the trio Chunky, Novi & Ernie that I saw at The Other End as a kid.” Another album session superstar is B-3 player Dick Sims, mostly famous for his work with Eric Clapton. “My engineer Dale Lawton brought Dick in and it added a real depth to every track he played on,” says Ragogna. “Dale not only saved the project that began in a Studio City rehearsal room that we thoroughly maxed out–I think we might have even blown it up–but he also turned the project into an audiophile album by recording it on 2″ multitrack tape at 30 ips, mixed down to 1/2” tape also at 30 ips. It was mixed at Chick Corea‘s Mad Hatter Studios where Dale had a longtime engineering gig.”

Also appearing on Invisible World is Ragogna’s former Almost Brothers partner and longtime friend and musical cohort Steve Mosto, who supplies keyboards and wrote or co-wrote much of the album’s original material. “Steve and I wrote together often over the years, some of those songs being ‘Invisible World,’ ‘Build Ourselves a Love,’ and the rewritten ‘Two Hearts and a Shot of Love’ and “The Getaway,” says Ragogna. “I wanted the project to be mostly original material, so these songs became obvious choices. Also Steve wrote a few great songs that I added reworked lyrics to, my favorite being ‘Come to Rome,’ and my version tried to respect his original production as much as possible. ‘Beautiful (Every Day)’ is another Steve Mosto anthem that I switched up a little, and his ‘Hypnotized’ verses are thoroughly mesmerizing.” Ragogna’s original take on Mosto’s “Rosemary Jane” is the only track that doesn’t appear on Invisible World. “I stupidly reworked Steve’s concept and rewrote the hook as ‘Rosemary J,'” Ragogna admits. “Thankfully, John X. Volaitis‘ remix fixes the problem, the title and vocal hook restoring the title and song back to ‘Rosemary Jane.'” The remix appears as a bonus track on the Writer’s Block disc, and the Invisible World disc includes Volaitis’ remixes of “Invisible World,” “Valentine’s Day,” “Build Ourselves a Love” and “Come to Rome.”

With the penultimate track being the Christmas rewrite/remix of “Two Hearts and a Shot of Love,” California Chronicles‘ second disc ends with a version of “White Christmas” recorded on a Voice-O-Graph by the artist’s parents Attilio Ragogna and Theresa Elferis in a Coney Island boardwalk kiosk when they were teenagers. “My mother had a beautiful voice and there were many recordings made of her singing to Nelson Riddle instrumental albums that disappeared when she died,” says Ragogna. “She was a New York City performer who sang and, apparently, also danced–something my Aunt Angie revealed at my mom’s funeral–in uptown clubs for many years when I was growing up. She had such a beautiful voice and this scratchy recording of her with my dad hamming it up in unison is all I have left to remember them both. The recording was added to California Chronicles as my tribute and thank you for her musical inspiration and guidance during my childhood years, as well as it being a shoutout to my jock dad.”