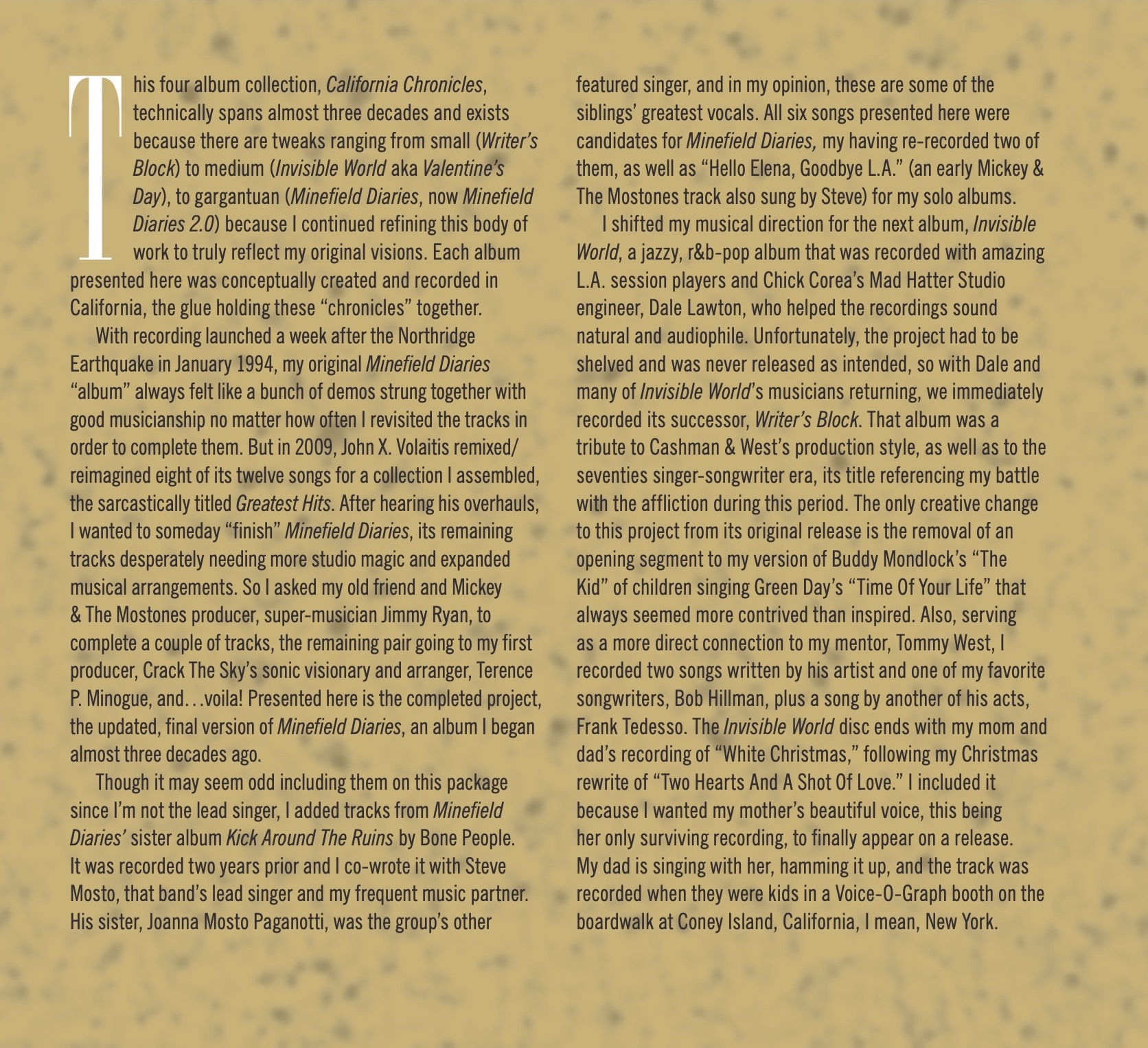 Of all the albums restored on Mike Ragogna‘s four CD set California Chronicles, its third disc containing his solo album Writer’s Block has the most complicated assembly. Not only does it feature the previously unreleased Invisible World followup, but its theme actually was based on his affliction, as well as being a shoutout to the songwriters covered on the album. Invisible World featured mostly original material, much of which was co-written with his former music partner Steve Mosto (The Almost Brothers, Body Politic, Bone People), plus Mosto songs that were lyrically and musically revisited by Ragogna. Writer’s Block‘s tracklist includes material by some of the artist’s favorite legacy singer-songwriters, including Joni Mitchell, Brill Building legends Carole King and Barry Mann, plus John Mayer and Five For Fighting‘s John Ondrasik.

“Working with such a high caliber of musicians on Invisible World was pretty intimidating,” admits Ragogna. “I knew I needed to step up my songwriting game but as I say on the radio spot that ends disc three, ‘The muse wasn’t comin’. On the other hand, I was feeling the momentum that resulted from recording the previous album’s 13 tracks and I didn’t want to risk losing this awesome creative team.” Mike’s engineer and production consultant Dale Lawton booked the first sessions in a Univision production room before moving the project to L.A.’s Studio 56, the renamed Radio Recorders facility. “The building had a cool, old school vibe that definitely had an effect on the recording process,” says Ragogna. “Elvis Presley, Frank Sinatra, and a lot of great heritage artists passed through Radio Recorders, and I felt like my performances had to be better than my normal approach. They had to be more ‘present’ and intimate.”

Contrasting with the approach taken on Invisible World, Ragogna and Lawton employed a warmer sonic setting for Writer’s Block‘s musical backdrop. The artist’s interpretation of Buddy Mondlock‘s “The Kid” and Frank Tedesso‘s “Margaret” benefit most from that approach, and the Ragogna-Mosto original “Diamonds” launches the album, utilizing production ideas he learned from his mentor Tommy West. “If it weren’t for Tommy, I never would have had a recording career,” says Ragogna. “As part of Cashman & West, he produced his best friend Jim Croce‘s records. The recording of Steve’s and my song ‘Diamonds’ is a tribute to his rock ‘n’ roll roots and those Croce ‘party’ hits he produced with Terry Cashman.”

West also produced Ragogna and Mosto as The Everly Brothers/Simon & Garfunkel-inspired duo, The Almost Brothers. His spirit also can be heard throughout the album, especially on the tracks “The Late Night” and “Games,” two songs written by Bob Hillman, an artist West produced. “Bob Hillman is one of the best under-the-radar songwriters,” says Ragogna. “Tommy adored him and as usual in the music business–and I know this firsthand with my own albums–if you don’t have an industry machine supporting your releases, you have to get REALLY lucky to break through. But of all the artists I’ve ever met, Bob Hillman so deserves notoriety and success. He’s one of the greats.”

In addition to the cover material and “Diamonds,” Writer’s Block includes three more originals. They are a remake of the Bone People track “Someone Loves Somebody” that was co-written with Mosto, Ragogna’s older “Hello Elena, Goodbye L.A.,” and the album’s title track. Thanks to Lawton’s talent rolodex, The Chambers Brothers‘ Lester Chambers blew harmonica on four tracks, including “Writer’s Block.” “It was hysterical how the two of us kept missing our cues,” says Ragogna. “In the recording, Lester’s line, ‘I didn’t mean to have it suck or anything,’ plays off of my lead vocal that opines on how miserable my new song was. He heard the lead vocal and thought it was me commenting on his playing, which was soooo far from what was going on! After that, we had some more fun, you could hear him laughing on the recording.”

Fino Roverato brought two important players to the session that included Richie Gajate-Garcia, who relocated to the drums, adding a subtler emotional read to the batch of lyric-heavy songs, and keyboardist Steve Welch, who brought hook-filled keyboard overdubs and complicated string arrangements. Ragogna remembers, “When I heard Steve’s piano on ‘Hello Elena, Goodbye L.A.’ and his strings on ‘Someone Loves Somebody,’ it was clear he understood these songs, and there was so much appropriateness in all the notes that came out of him.” He adds, “Also, Steve’s ‘noir’ strings on my cover of John Mayer’s ‘Neon’ plus his work on the remixed track of ‘Dinosaur Bones’ that now makes up part of Minefield Diaries 2.0 are some of the most original arrangements I’ve ever heard.” Welch and Roverato eventually would return for Ragogna’s Summerland sessions as well as for the John X. Volaitis remixes that appear as bonus tracks across the four discs of California Chronicles.

Writer’s Block has one slight adjustment, the removal of the intro piece to “The Kid” featuring Mosto’s son Willie’s class singing “Time Of Your Life.” “Steve recorded this really sweet version of Green Day‘s hit with Willie’s class and at the time, I thought it synced-up perfectly with my version of ‘The Kid,'” says Ragogna. “But now I feel that my connecting the messages of those two songs is pretty overbearing, so I removed the segment to let ‘The Kid’ and its powerful narrative breathe. As for slighting my godson Willie, he already made his appearance on Minefield Diaries‘ ‘Dinosaur Bones,’ and he is name-checked in my song ‘Writer’s Block.'” Additionally, Willie Mosto is the subject of two other songs appearing on California Chronicles, “Bright Eyes,” written as a “Danny’s Song”-type gift to Steve Mosto regarding Willie’s birth, and “Willie’s Got a Guitar” that is a tribute to the young artist’s superb musicianship.

Following the album are nine bonus tracks that include four Volaitis remixes, including Mosto’s original “Rosemary Jane,” a song left off Invisible World that Ragogna slightly reworked a second time for its remix. “Actually, my messing up my first shot at the song might have been a good thing since it seems to fit much better with the Writer’s Block tracklist,” Ragogna says. The bonus tracks that follow are “In Her Own World,” “WWGD,” and “Clark & Bruce,” three demos of material left off the artist’s next album Summerland. “In Her Own World” starts off as the original two-track vocal, acoustic guitar, and drum loop demo that expands mid-point into a full-blown production that includes block vocals and harmonies by Ragogna, strings and harp by Terence P. Minogue, flutes by Tim Britton, and even more instruments from the pair. There also are appearances by Mosto on piano (its first overdubbed instrument) and members of The Mike Ragogna Band from the ’80s, Frank Stephens (electric guitar) and Annette Stephens (bass). Ragogna adds, “My child Skylar makes his vocal debut on the ‘la-las’ in the end section…it’s kind of precious.”

Ragogna’s childhood friend, Joey D’Imperio whose group Lady Killer was one of the earliest ’80s metal bands, contributes electric guitar as well. “Joe and I sang in Mildred Hohner‘s children’s choir when we attended NYC’s Epiphany School,” Ragogna recalls. “Joey’s dad, Joe D’Imperio, Sr., was a respected A&R guy at RCA Records who was given one of their distributed labels, Ringling Bros & Barnum and Bailey Circus‘ Wheel Records, to oversee. When I was 15, he approached Cashman & West to produce me since I was close to Tommy and was working after school as the duo’s office kid while being developed as a singer-songwriter. Since Tommy was a huge Frankie Lymon fan, he turned down Joe Sr.’s request in order to protect me from what he thought were the dangers of becoming a childstar.” Wheel Records initially was a “bubblegum” label whose mission was to release Mattel toy-themed projects, although it also signed credible artists like the folky Susan Pilsbury. The Partridge Family‘s producer Wes Farrell oversaw recordings by Wheel’s The Rock Flowers, whose three girl vocal group represented the toy line’s Lilac, Heather, and Rosemary (think Bratz dolls). Glen Campbell producer Al DeLory, who arranged The Almost Brothers album strings in the ’80s, produced The Rock Flowers’ fifth and final single.

One of the most bizarre recordings of Ragogna’s solo work is “WWGD” that brings “In Her Own World”‘s musicians back to explode yet another simple two-track demo. One of its sonic highlights is Frank Stephens’ dark guitar hook, as well as Ragogna and the two Stephens’ primal chants and grunts that emulate a sonic warzone, about which the artist jokes, “Do NOT listen to this song high!” To emphasize the song’s message, a snippet of the original song “Warzone” from a Tampa Theatre performance by The Mike Ragogna Band is attached to the end as an epilogue, completing the song’s ominous warning. The last of the demos is the simple guitar/vocal track “Clark & Bruce,” a song suggesting we all can choose to be a hero. It was inspired by his friendship with producer, filmographer, and hockey player Jacques Lambert. Britton turned it into a faux-live recording, with Ragogna overdubbing during the end applause section, “God bless the cheerful giver,” a line borrowed with permission from his friend Rupert Holmes‘ song “Second Saxophone.”

The next bonus track, “Don’t Let The Sun Catch You Crying” (originally released by Gerry & The Pacemakers) was recorded on an iPhone during the height of 2020’s Covid-19 outbreak as a simple guitar/vocal Facebook post. It was meant as a quick distraction for Ragogna’s sequestered friends on the platform, but the performance seemed strong enough to salvage for California Chronicles. Like the three Summerland demos, the track was embellished in 2021 with a Minogue orchestral arrangement plus additional instruments from him and Britton. The upgraded recording attempts to recreate the mid-’60s when the original version was a hit, and is also a tribute to Ragogna’s sister Maryann, this being her favorite song as a teenager. To further imitate the era in which the original was released, California Chronicles‘ designer John Sellards supplies the voice of the DJ “Ray Ford” that introduces the track, and his wife Christina Almeida Sellards lends her WIWS station associate “Dottie Greco” alias as well. The disc ends with a minute and a half radio spot, Ragogna’s vocal recorded at the time with Britton assembling its 2021 musical bed.