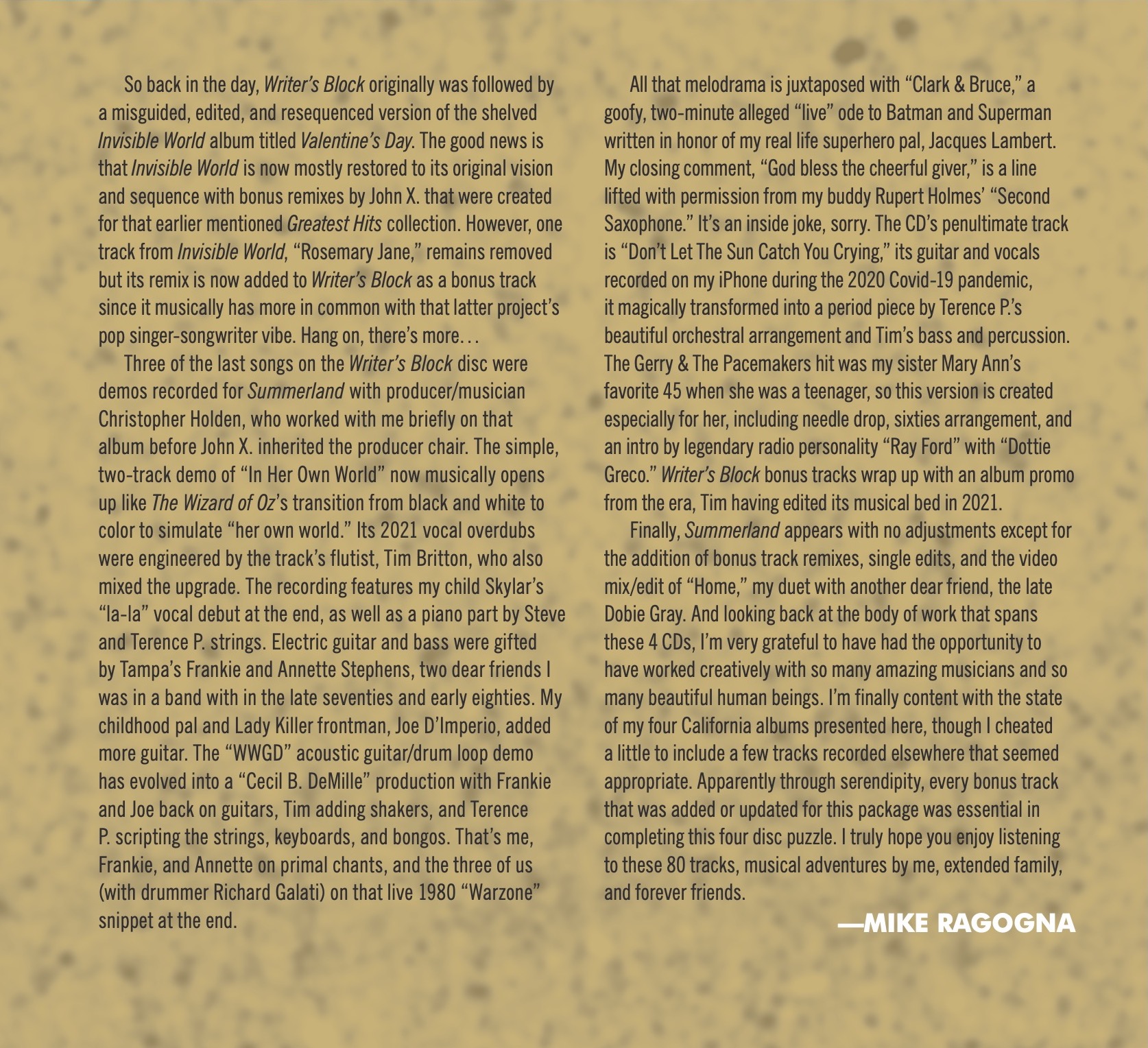 California Chronicles‘ fourth disc puts the spotlight on Mike Ragogna‘s concept album, Summerland. Comprised only of Ragogna originals, the album explores life in the ’00s through the lens of pop anthems, quirky love songs, and personal narratives. The Summerland title is a statement on America’s obsession with life as entertainment and its fixation on eternal youth. Its guest star Dobie Gray appears on Ragogna’s social commentary “Home,” which is a period piece that is a dual treatise both on endless middle east wars and New Orleans’ lack of a timely restoration of its post-Katrina 9th Ward. The album also includes “Blue,” his memoir about time spent with Joni Mitchell, and “Darkness,” an autobiographical song about Ragogna’s family and childhood. Mostly produced by John X. Volaitis after an early producer run with Christopher Holden, Summerland‘s bonus tracks contain single mixes, remixes, edits, and the video version of “Home” that features Ragogna and Gray blending the song’s themes into a conversation between the two.

“All of the albums on California Chronicles are special to me for various reasons but Summerland probably is my favorite,” says Ragogna. “It was the culmination of everything I learned as a songwriter, and I was really swinging for the fences to have that elusive ‘classic’ album. It’s not perfect, what is, but I think it’s as close as I’m getting in this lifetime. John and Chris, as well as Fino [Roverato] and Steve [Welch] all worked their best to interpret each song’s topic and make these recordings larger than life.” Summerland kicks off with “Waiting for the Plane to Land,” a rocker about indecision. “The ’00s was full of nothing ever making it to completion, whether it be not completing the restoration of the poorest parts of New Orleans after Katrina, or the endless occupation of Iraq and Afghanistan,” says Ragogna. “In those days, life in America felt like it was ‘on hold,’ and other Summerland songs touch on this concept. ‘Willie’s Got a Guitar,’ a fawning, futuristic tale of a young, god-like guitar slinger involving my godson Willie Mosto also touches on ‘nothing to see here’ corruption and political stalemate.” He adds, “Of course, in this ultimately positive depiction of a dystopian era, through music, Willie saves the day!”

“Sharks” and “Truth” take a direct aim at power and deceit. Ragogna confesses, “‘Sharks’ is my finger waggin’ lecture about many soulless executives I’ve encountered whose only interest was climbing. At the end of my music business career and behind the scenes as a catalog producer, I experienced too much of this. It made me realize how lucky I’d been during my compilation career–and practically my whole music career–that I was able to avoid weasels like that…until I wasn’t. My last couple years working for or with some of these folks totally disillusioned me.” The track’s production is inspired by Peter Gabriel‘s “Solsbury Hill”‘s kitchen sink chaos in that song’s fade. “Truth” began as a challenge to George W. Bush‘s reasoning for starting multiple wars in the middle east but evolved into a statement on truth overall. “The original version included Bush’s Mission Accomplished! declaration, as well as his cynical, nasty jokes about not finding weapons of mass destruction under the sofa, etc. When I realized I’d have to listen to that garbage over and over, we had to undo some of the production. Ultimately, it was the right decision because the bigger message is more important, that however long it takes, truth eventually wins.” The reworked production of the song became part of the album, and the original is included in the disc’s bonus tracks for archival purposes.

A humorous track is the slightly acerbic “Not Your Father’s Folk Song” that name checks everything from No Depression to “heroine chic,” and everyone from The Byrds to The Flying Burrito Brothers, as well as Cher, Britney Spears, and Jennifer Lopez to Kurt Cobain and Brad Nowell, and The Beatles to Frank Sinatra. “It’s one of those shopping list songs, not exactly as dense as Billy Joel‘s ‘We Didn’t Start the Fire,'” Ragogna explains, “but it does contain a bunch of cultural references. John intuitively played a Beatles via George Martin synth string hook that wrapped up my song’s warped sense of humor.” Though there is humor seeded throughout Summerland, it contrasts overtly with the more serious material, such as the antiwar song “Home.” “Dobie [Gray] loved the song’s message and instantly was on board for the duet,” says Ragogna. “We both sang from two different protagonists’ perspectives, my being a soldier sent to Iraq, Dobie being a New Orleans 9th Ward resident. When it came time to film a video, two versions were created, the earlier one of my telling the story with war scenes and footage of New Orleans’ ignored devastation. Version 2 is the one with Dobie on camera. Initially, I asked him to be in the video but he was unable to at the time and I thought that was the end of that. But a short time after the first version of the video that was directed by Ramon Mentor debuted on The Huffington Post thanks to David Wild, Dobie’s schedule opened up. So I sent a cameraman to his home in Nashville in order to create a second, updated version of the video that resulted in a good amount of Dobie footage in Centennial Park being used. I think it may be his last video performance before he passed away in December 2011. I’m so grateful he made such an effort to be a part of the video and that original duet recording. I miss our conversations that always were about anything and everything.”

“Blue” is the album’s creative highlight. Sung over a sophisticated Steve Welch piano part that’s joined only by strings and a standup bass, Ragogna adds a vocal that narrates a story about time spent with Joni Mitchell. “We worked on a couple of projects together including a Geffen box set and a political compilation of her Geffen and Warners material,” says Ragogna. “Months later and because we got along really well, I recorded her for an intended autobiography that sadly never got past the transcription stage.” He continues, “Originally, I was supposed to be the transcriber but found I couldn’t keep up due to my having a demanding job and our recording mostly happening nights until dawn. So I then volunteered just to record Joni and her stories, helping out as best as I could for months. Having spent a lot of time together, I believe we became close, at least during those years I worked with her on this project and her collections. So my song is an amalgam of different experiences, my showing respect for her genius, and my personal opinion of her state of being at the time.”

Speaking of autobiographies, “Darkness” is one that shares a level of depth that “Blue” explores. It describes Ragogna’s and his sister’s challenging childhood, as well as his parents’ growing up on the streets of New York City’s midtown. “‘Darkness’ talks about the battle of light and dark and how it affected my family. In the end, it offers hope for the future with my referencing a theoretical child and how darkness will “never touch the sun,” the word intentionally meant to also mean my “son,” or daughter. It turns out years later, I ended up with two children and that fight against darkness continues, although with these kids, the battle’s been pretty easy so far, knock on wood.”

Summerland also contains three love songs that include “Heavy Traffic,” which uses a travel metaphor for the concept of living in the moment. “The song is about having to deal as a couple with life’s daily challenges,” says Ragogna. “I think its best lyrics use a couple of double entendres like, ‘Honey, I know we’ll arrive somewhere someday because everything’s connected to the inner state, which is a play on the word ‘interstate.’ And as long as you’re beside me, life behind the wheel–a reference to karma–is not all just heavy traffic.” Paul Simon‘s influence and wiseassery can be found in the New York meets Jamaica sounding “What She Wants” that ends with Ragogna’s frequent technique of flipping the characters or scenario in a song’s conclusion. “The song is about being driven crazy by one’s partner but the fit is so perfect and since they really do love each other, they stay together,” Ragogna reveals. A bit more serious, “No More Love Songs” sets the terms for furthering a relationship and escaping the superficialness in which it’s stuck. “Chris’ instrumental keyboard break illustrates the ‘pause’ for thought that a couple may experience when they find themselves in a rut,” says Ragogna. “At the time, I think he was a fan of groups like Coldplay, so he understood the concept of underplaying an instrument for maximum effect. He also scored TV shows and was kind of on the ‘less is more’ team.”

In addition to its being on Summerland, “Playing Like It’s Summer” appears twice more in the fourth disc’s bonus track section, including in its original, more pensive form. “The song originally was pretty depressing,” Ragogna admits. “It was about growing old, looking out at the world, wanting to be young again, and to play like it’s summer. I think I scared John with that one, so I came to my senses and rewrote it into something that was more upbeat and truthful, that as an older person, one still can live life like it’s summer.” A very edited version of the track utilized as the theme song to Mike Ragogna’s 2.0 radio (KRUU) and local TV shows musically concludes the disc, as well as the four disc project. However, California Chronicles actually ends with a hidden track of Ragogna’s nephew Corey Ward phoning his uncle about the album. “My children Brandon and Skylar plus my parents, my godson Willie, and symbolically, my sister were on the project, so I absolutely had to have my nephew on it in some way. I asked him to leave a message on my voicemail and I would work with it in whatever state it was in. Lucky for me, Corey left an awesome message–‘Hey, Uncle Mike…what did I miss?'”