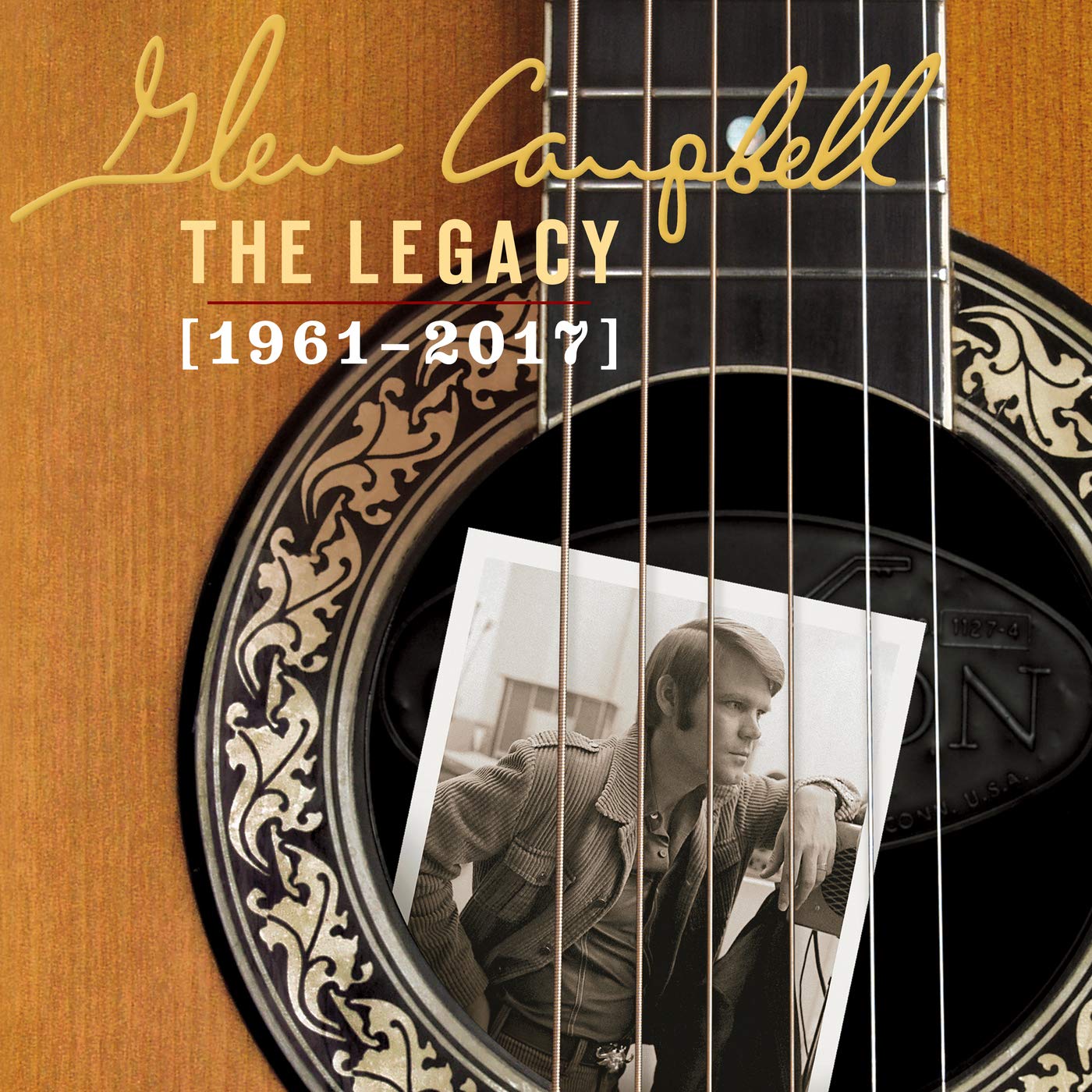 Fifteen years ago, Glen Campbell fans were treated to a career-spanning box set that reached back to his days of arriving in Los Angeles (“Turn Around, Look At Me”) and as part of The Green River Boys (“Kentucky Means Paradise”), working its way forward while culling material from virtually all his significant albums and singles. It originally was released as a four disc collection, its fourth disc presenting 15 live tracks that seemed to serve the purpose of both showing how great Campbell performed to audiences and to expand the release beyond three mostly solid CDs of studio classics.

In 2019, that box set’s eras were expanded further, thus its retitling as The Legacy [1961-2017]. This “updated” Legacy… adjusts the original artwork to fit its new, environmentally-conscious cardboard foldout, and its first three discs repeat the former track lists exactly. Like its previous incarnation, almost all the hits are included, their being Campbell’s most enduring contributions to pop culture. Songs such as “Gentle On My Mind,” “By The Time I Get To Phoenix,” “Wichita Lineman,” and “Galveston” (the latter three written by super-songwriter, Jimmy Webb, a continuing contributor throughout Campbell’s career) are the darlings of the batch, with runners-up “Rhinestone Cowboy,” “Country Boy (You Got Your Feet In L.A.),” and his cover of Conway Twitty’s “It’s Only Make Believe” supplying requisite ’70s lovable pop kitsch and bombast.

Some of his duet partners also are represented through recordings with Anne Murray (“I Say A Little Prayer/By The Time I Get To Phoenix,” “Show Me The Way”), Bobbie Gentry (“Let It Be Me,” “All I Have To Do Is Dream”), Rita Coolidge (“Somethin’ ‘Bout You Baby I Like”), and Steve Wariner (“The Hand That Rocks The Cradle”). This Legacy… still includes fan favorites “Dreams Of The Everyday Housewife,” “Highwayman,” “Where’s The Playground Susie,” “The Moon’s A Harsh Mistress,” “Honey, Come Back” (those last four penned by Webb), “True Grit” (the theme to the 1969 movie in which Campbell co-starred as Texas Ranger La Boeuf), and one of the artist’s last big hits, his cover of Allen Toussaint’s “Southern Nights.”

Another good decision, thus the “2017” title adjustment, comes with the replacement fourth disc. It jettisons the live tracks and takes us through some of Glen Campbell’s best post-2011 material, especially with tracks from his sonic homage to his ’60s recordings, Meet Glen Campbell, that really was a magnificent return to form for the artist thanks mainly to producer Julian Raymond and engineer/co-producer Howard Willing. In full disclosure, I suggested Campbell’s cover of Green Day’s “Good Riddance (Time Of Your Life)” to Raymond during my EMI tenure, that track included on the box set’s new disc. I also suggested he cover Leonard Cohen’s “Hallelujah,” which quite frankly, I wished he had recorded instead since he would have killed it.

Like many major career overviews, there were some problems with the original box (that now have carried over to the revised reissue), mainly a few really surprising omissions such as the popular hit “See You On Sunday” that was featured on Campbell’s Bloodline album, its Gordon Lightfoot-esque title track also missing. Again, in full disclosure, my having been a compilation/reissue producer for about a couple decades (my also having overseen a double disc Glen Campbell “best of”), the phrase “everyone’s collection sucks but mine” might be coming into play here and I’ll cop to that. But considering how well done the box’s track list is otherwise, perhaps leaving off a couple of “deep tracks” to accommodate one of Campbell’s last big hits, one that you couldn’t escape if you owned a radio in New York City in 1976, just feels awkward.

On the technical side, there apparently were other problems with the original release, such as slight tape speed variations and mastering that was on the helium side of the treble region. I only will opine on the mastering that seems to be the same as the original release when compared to the “2011” version, my theory being and ears telling me the original three discs were left as is and we’ll leave it there. Wait, no we won’t. My little scolding would be this possibly is the last big Glen Campbell CD overview and perhaps he should have received a bit more sonic love and repertoire revisit than a simple disc switch-out, although, yeah, good work with disc four.

So. Should one check out The Legacy [1961-2017], Glen Campbell’s most aggressive overview to date? Considering people have been listening to MP3s for a couple decades and prior to that, boom boxes, most likely, not many listeners will care about the sparkly-bright EQ or even slight speed variations. Forgive me but I have to point out quirks like this for the few who still do care about sound quality. Will anyone miss omitted tracks like his duet with ex-wife Tanya Tucker, “Why Don’t We Just Sleep On It,” his breathtaking “Still Within The Sound Of My Voice” (yet another Jimmy Webb original), or “See You On Sunday,” the hit I obsessed about earlier in this review? No, since balancing things out on this new derivative are disc four’s added recordings from the comeback album Meet Glen Campbell (but where’s “Sing,” come on!), plus three from his very last album, such as its title track “Adiós,” a cover of the Fred Neil-penned and Harry Nilsson hit “Everybody’s Talkin’,” as well as the lovely “It Won’t Bring Her Back.” Sure, pick it up, and throw a few other CDs into your virtual cart, such as Adiós, Meet Glen Campbell and even Ghost On The Canvas to get the more complete, updated musical story of one of the greatest pop singers of all time.

7. Just To Satisfy You

9. Gentle On My Mind

15. Turn Around And Look At Me (New Version)

16. The Legend Of Bonnie And Clyde

20. Dreams Of The Everyday Housewife

7. One Pair Of Hands

8. All I Have To Do Is Dream (Glen Campbell & Bobbie Gentry)

9. Everything A Man Could Ever Need

11. Pave Your Way Into Tomorrow

15. I Say A Little Prayer / By The Time I Get To Phoenix (Medley) (Glen Campbell & Anne Murray)

21. The Moon’s A Harsh Mistress

4. Don’t Pull Your Love / Then You Can Tell Me Goodbye (Medley)

11. Somethin’ ’Bout You Baby I Like (Glen Campbell With Rita Coolidge)

16. The Hand That Rocks The Cradle (Glen Campbell With Steve Wariner)

18. If These Walls Could Speak

7. Good Riddance (Time Of Your Life)

8. Ghost On The Canvas

9. Waiting On The Comin’ Of My Lord