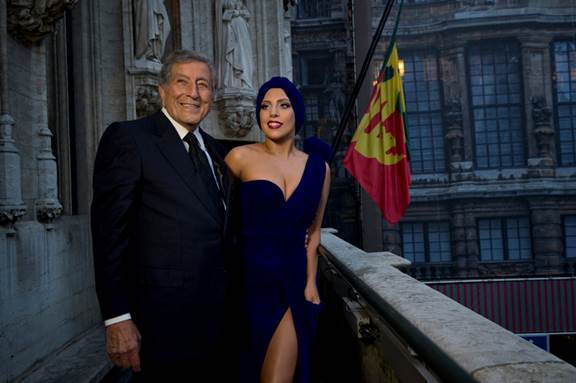 TONY BENNETT AND LADY GAGA’S CHEEK TO CHEEK AT NO. 1 ON THE BILLBOARD 200, JAZZ ALBUM AND TRADITIONAL JAZZ ALBUM CHARTS

Bennett Breaks Personal Record By Remaining Oldest Artist to Debut at #1 on Billboard 200 at the Age of 88; Gaga Scores Third Consecutive #1 Album

Tony Bennett and Lady Gaga’s widely acclaimed jazz album, Cheek To Cheek, debuted at no. 1 this week on the Billboard 200 Album and hits #1 on the Jazz Album and Traditional Jazz Album Charts. Released September 23rd on Streamline/Columbia/Interscope Records, Cheek To Cheek has received extensive widespread critical praise around the world, including such leading publications as USA TODAY (“an epic musical mashup”), ROLLING STONE (“Gaga has real chemistry with Bennett”), PEOPLE (“An unlikely pairing results in beautiful music on this album of jazz standards. [Gaga] is a revelation.”), THE TIMES OF LONDON (“crooning nirvana”) and the CHICAGO SUN-TIMES (“A musical match made in jazz/standards heaven.”)

With the release of Cheek to Cheek, Bennett breaks his own record, set in 2011 when DUETS II debuted at #1 at the age of 85. Now at 88, Bennett remains the oldest artist in music industry history to have an album on the #1 spot on the Billboard charts. Cheek To Cheek marks Lady Gaga’s third consecutive #1 album release in just over three years; this is the second time in Bennett’s career that he has had an album debut at #1 in both Billboard’s Pop and Jazz Album charts. Two tracks released prior to the album, the Cole Porter classic “Anything Goes”, and the Jimmy McHugh and Dorothy Fields standard “I Can’t Give You Anything But Love”, both debuted at #1 on Billboard’s Digital Jazz charts.

Cheek To Cheek features classic jazz standards sung by Lady Gaga and Tony Bennett in a combination of vocal duets and solo performances. Each song was handpicked by the artists, and the album features classic selections from the Great American Songbook including “Anything Goes,” “It Don’t Mean A Thing (If It Ain’t Got That Swing),” “Sophisticated Lady,” “Lush Life,” and the record’s title track, “Cheek To Cheek.” Recorded in New York City, the record took over a year to complete and features jazz musicians associated with both artists including members of Bennett’s quartet, Mike Renzi, Gray Sargent, Harold Jones and Marshall Wood as well pianist Tom Lanier. Jazz trumpeter Brian Newman, a long-time friend and colleague of Lady Gaga appears on the album as well with his NYC based jazz quintet. Jazz soloists on selected tracks include tenor saxophonist Joe Lovano, trumpeter George Rabbai and flutist Paul Horn, who passed away in July.

Upcoming highlights of the Cheek To Cheek campaign include: